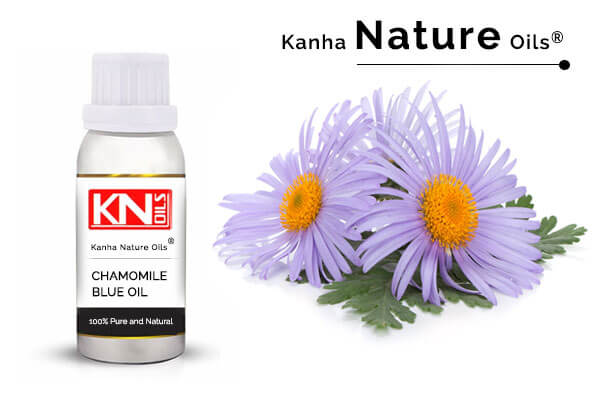 Description:
Chamomile is a very useful medicinal plant. It is available in two most popular varieties, namely German chamomile (Matricaria chamomilla/Chamomilla Recutita) and Roman chamomile (Chamaemelum Nobile/ Anthemis nobilis). German chamomile is native to Europe and Western Asia and has become widely distributed over Europe, North Africa, and the temperate region of Asia. German Chamomile oil is generally extracted from the flowers and buds by steam distillation. Oil yield is about 0.4 – 1.2%.

The biological activity of German chamomile oil is mainly due to the presence of phenolic compounds and some components of the essential oil like α-bisabolol, bisabolol oxides, and azulenes, including camazulene. Blue chamomile is native to southern and eastern Europe and is also grown in Hungary, Egypt, France, and Asia. German, or blue chamomile, has a higher azulene (chamazulene) content than its Roman chamomile, which gives German chamomile its deep blue color. German Chamomile oil is also known as Chamomile blue oil because of its deep, dark blue color. The dark blue color is due to the presence of the chamazulene.

During steam distillation of the essential oil, the natural matricin that is present in German Chamomile reacts to form the chamazulene that we find in the oil.

Aromatherapy:
Due to the presence of some chemical compounds Azulene (Chamazulene) in blue chamomile the oil acts as a powerful anti-inflammatory. Bisabolol is an excellent anti-aging compound. Myrcene act as easing the symptoms associated with stress. Similarly, beta-pinene is believed to help mood-enhancing.