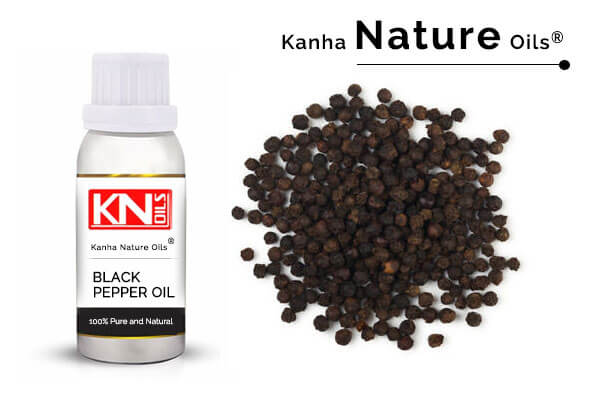 Description:
Black pepper is native to South Asia and Southeast Asia. In India Black pepper is cultivated in Kerala & Karnataka state of South India for its fruit, known as a peppercorn which is usually dried and used as a spice. Vietnam is the world’s largest producer of pepper, producing about 36% of the world’s production. Other major producers in the world include Indonesia and Brazil.

The essential oil of black pepper is obtained by the steam distillation of dried berries/peppercorns of Piper nigrum. The yield of oil in peppercorn is 1 to 3.5 %. The oil is colorless to pale/greenish-yellow color with warm, peppery, slightly sweet, and spicy notes.

In perfumery, it is used as a middle note.

The essential oils derived from black pepper find a variety of applications in various fields, including the manufacture of food and medicine. Black pepper oil has a variety of compounds that comprise medicinal, nutritive, and flavoring properties.

Application:
~ Black pepper essential oil can be used to maintain digestion, remove constipation, and decrease in the levels of cholesterol.
~ It also functions as an antiviral, analgesic, anti-inflammatory, and maintains blood pressure.
~ This essential oil is a natural remedy for colds, cough, aches and pains, influenza, flatulence, and rheumatism.

Aromatherapy:
Black pepper oil helps to stimulate circulation, creating a feeling of warmth and because of its anti-inflammatory and antispasmodic properties, black pepper oil works to reduce muscle pain, injuries, tendonitis, arthritis, and rheumatism if applied topically or taken by the diffuser.